The Army of the Lord, (Romanian: Oastea Domnului), is a spiritual and moral renewal movement in Romania founded, in 1922, by Fr. Joseph Trifa, a Romanian Orthodox priest.

Fr. Iosif Trifa defined the Army of the Lord as a voluntary lay grassroots organization based on the Bible for revitalizing the Romanian Orthodox Church.

Controversy has surrounded the movement since its founding as Fr. Trifa's writingsare silent concerning the role of the church and liturgy in salvation and spirituality. In his writings, his understanding of salvation and witness is expressed in language that is more commonly used by Western Protestantism. At the same time, however, Fr. Trifa insisted that the purpose of the movement was to promote a more integral way of living the Gospel within the Church.

At the same time, fearing the routinization of what he perceived to be a primarily charismatic movement, he resisted the idea of an institutionalization of his movement.

Thus, his ideas became objectionable to the hierarchy of the Church of Romania and resulted in his being defrocked in 1937.Fr. Trifa reposed in 1938. The movement continued to function precariously until the Second World War, but was dissolved after the establishment of a Communist regime in Romania.

In 1990, after the fall of the Communist regime, Fr. Iosif Trifa's sanction was revoked by the Holy Synod of the Romanian Orthodox Church, who rehabilitated him on the grounds of his having asked the pardon of his bishop. At the same time, the Holy Synod granted recognition to the reemerging Army of the Lord, but placed it under special supervision by a bishop designated every few years. Bishops responsible for relations with the Army of the Lord included Metropolitan Nicolae Corneanu of Banat, the current Metropolitan Seraphim Joanta of Central and Northern Europe, and Archbishop Casian Craciun of the Lower Danube.

Since the fall of communism in the last decade of the twentieth century, the course of the organization has been torn over issues about the purpose and mission of the Army of the Lord.

Some characteristics of the Army of the Lord

Incription in the Army of the Lord required participants to embrace certain rules of behavior, intended to facilitate a deeper and better spiritual life. But the way these rules were established and practiced let the movement open to criticism from within the Orthodox Church itself, almost since the very beginning.

Informal address: Members of the Army of the Lord are globally called “soldiers” and call each other (and, occasionally, others around) “brother” and “sister” respectively, following the Apostolic model and that of the early Church. This was intended to remind them their brotherhood in Christ.

Fr. Iosif Trifa, the founder of the “Army of the Lord” emphasized the fact that calling oneself a “soldier of the Lord” was not in itself a novelty, nor was it meant to be exclusive: it was based on the Scriptures and shared by all Christians.  Yet evidence shows that the title of “soldiers of the Lord” was being used by some members of the “Army” as a title that set them apart from other Christians, and this attitude has been criticized as a demonstration of pride, as well as for having a sectarian flavor.

Greeting: Members of the “Army” would greet each other with: “-Praised be the Lord”, to which the answer would be “-Forever, amen!” This form of greeting was similar to the Roman-Catholic w: Laudetur Iesus Christus,  which was also used extensively by the Greek-Catholic communities in Transylvania, and is still in use in some regions in Romania, like the Maramureş.

Poetry and songs: As many of the founding members of the “Army”, like Traian Dorz, had a talent for poetry, within the ranks of the Army of the Lord flourished a specific kind of religious poetry, written in an easy, accessible style.

Most poems are focused on developing a personal relationship with Christ, struggle against sins, the Christian mission in the world, and the poetic interpretation of Scriptural passages. Many of these poems were set to music and turned into songs that the “soldiers” would sing at their regular meetings.

One criticism directed against the “soldiers” was their preference for their own range of sentimental songs and pietistic poetry over to the more sober, but theologically richer traditional liturgical music.

Meetings: Members of the Army were to meet regularly, either in church, after the services, or in other places, to discuss the activities of the movement, listen to sermons, conferences and spiritual discussions. At such meetings they would also normally recite poetry, chant songs, etc. The purpose of the meetings of the “Army” was not, in its founder’s intent, to replace Church services, but rather to provide an alternative to worldly “reunions” in pubs, bars and other such places.

The fact that the members of the “Army” held meetings in private houses, and the way these meetings were organized were also subject to criticism. Several authors noticed that the “soldiers” often preferred the “Army”’s meetings to Church services, and that some meetings were organized without the approval and supervision of local priests.It is however clear that these extra-liturgical meetings had been perceived as an innovation in the Church ever since the beginnings of the movement, and had ever since been frowned upon.

One should also note that, due to the persisting tensions between members of the “Army” and the Church hierarchy, acquiring a bishop’s approval for every single Army meeting would not have been easy.

Bible reading: “Soldiers” were required to read the Bible regularly, particularly the New Testament and the Psalms, and to help and encourage its reaching the widest possible audience. The Bible was considered the single most important book for every Christian.

A voluntary movement: The Army of the Lord founders appreciated that the movement had been founded through divine inspiration. It was a feature they were eager to preserve, and therefore refused formalization and institutionalization, for fear of a loss of enthusiasm and spontaneity. This was one of the leading sources of tension between the movement and the Church hierarchy, who attempted to normalize the workings of the movement and bring it under stricter institutional control. The emphasis on divine inspiration and enthusiasm was looked upon by several members of the clergy as an innovation since the early years of the movement, as these characteristics resembled closely the charismatic movements developing in the Protestant world. They were a source of tension within the movement, as well as with the Church hierarchy, a tension that remained unresolved to this day.

Some behavioral rules: Smoking and swearing were strictly forbidden to the members of the Army. For the unmarried youths and for former drink addicts, the use of alcoholic drinks was strictly forbidden. A glass of wine was allowed to more mature members of the “Army”. “Soldiers” were forbidden to enter pubs or bars and were not to attend meetings susceptible of leading to heavy drinking, smoking, or idle gossip. None of the above was in itself a novelty. Alcohol and smoking addictions, particularly in rural areas were widespread in Interwar Romania, and a source of concern for the clergy throughout the country. A direct attack on these had been one of the first targets of the movement itself, and one of the most popular.

Distinctions: For the members of the Army of the Lord, Fr. Iosif Trifa devised a distinctive sign, the Medallion or Cross of the Army of the Lord: a cross in red and blue, with a circle inscribed in it, and on it, written in white, a verse from the Scripture: “Share in suffering as a good soldier of Christ Jesus” (II Timothy 2,3).

Any member of the “Army” would be allowed to wear it, but they were required to swear not to wear it any more if they abandoned their commitment to the “Army”’s rules. 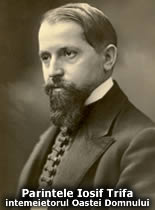 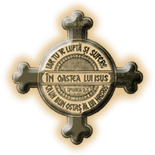